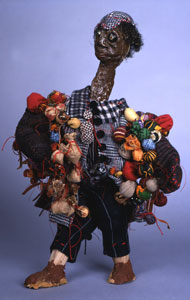 "When I was a kid, I made these little figures I called 'stick, stony tar.' There were made in the heat of summer when the asphalt bubbles." Sitting in the chair
Would be like sitting
In a bunch of memories. 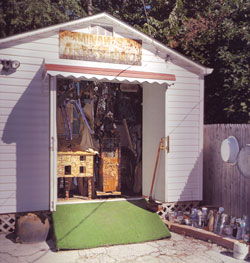 "In recent years, my wife and I have been teaching as a small college in North Dakota. A retired farmer in Woodworth (ND)—a close friend, kept his old barn filled to the brim with beautiful tools and every North Dakota license plate since statehood. A beautiful barn of remembrance. Aminah's studio gave meaning to this workshop barn in a completely different heritage."

We are the keepers
of hand-carved history

Etched in our memory
Sewn to our soul 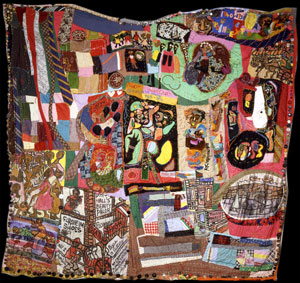 "I know my family history, it's fascinating to know other people's roots."

In the night
I climb up to dream.
Held so close
By the strongest arms.
Rocking in this chair
I wonder...I wonder

Safe in this chair
Of mud, of wood, of animal skin,
I am a child of the past
And a child for tomorrow
Catching the wisdom
Learning the stories
Listening to the heartbeats.

"Seeing the needlework, especially the button work, reminded me of my mother's button box and how I loved looking, for hours, at so many different buttons."

"I am proud to know that Columbus isn't as complacent as I thought."

When I look at this chair
I see me as an African Queen
With all my people beside me.
We cherish each other like family
We are some of the people
Who are part of your
African history from today 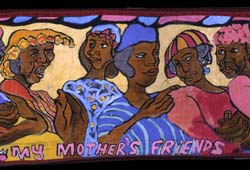 "There is a 'sweetness' about the work—a display of Black strength and determination." 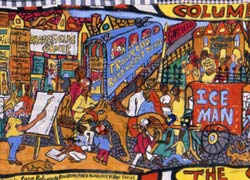 "Aminah's work provides an answer about past communities. It is layered—it is about Columbus, it is about the African-American experience, but it is also about me, my town, my family, and my history." 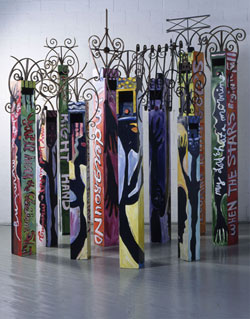 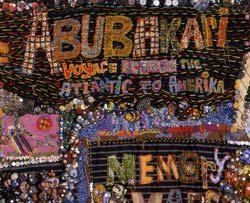 "Aminah seems to be so full of ideas and the need to communicate them. There seems to be a driving force within her that is like an erupting volcano that has taken over her life." 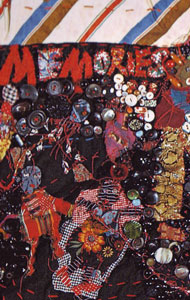 "My grandmother always had a jar of buttons I would play with as a child. I would sort them by color and size and string them together with a shoestring. When my grandmother passed away, her estate was auctioned. However, my uncle claimed her sewing machine as a gift for me. In the drawer of the sewing cabinet, I found the jar of buttons."

"This work is about the unity of family and creating with what you have rather than what you can purchase." 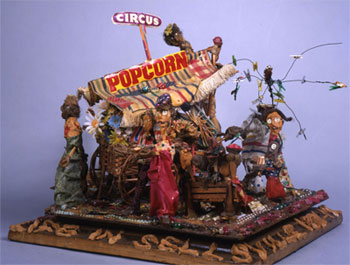 "As a young child, I would see the Sells Circus unload from the train…we would get out of school to help them unload." 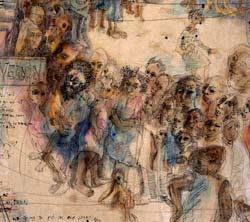 "I understand oppression as I have been in two wars in Honduras during my childhood. Politicians need to be more honest and care for the oppressed."

My chair is my wild
Throne — and it is only here
I come to hear the music,
the whispering unworded songs
above me.
Could it ride
on the waves?
It is unsquare, my chair.
the center of slump,
the rose of repose—
The trellis and ladder
of the stretched,
leaping, knotted,
laughing, wrinkled people
that are me. Raise
your hand,
if you want to,
unbutton your eyes.
There may be an answer
in your clothespin arm.